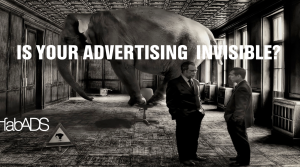 Most Adelaide Advertising Agencies won’t get you noticed.

That’s right we wrote it. Most Adelaide advertising agencies produce work that battles to be noticed. There is so much advertising. It is so loud and so relentless. There are so many ways to throw money away. But don’t be too hard on your agency it’s a minefield out there!

We have become so focused on irrelevancies that we have forgotten the first principals of being an Adelaide advertising agency -it doesn’t matter how well you sing if no one hears you.

Here are some ways Adelaide Marketing Directors wind up with invisible Adelaide advertising:

1. Confusing strategy with execution. Adelaide Marketing Directors spend six weeks on strategy and three days on execution. They think that because they have a strategy that has been tested to death that their work is done. Their work has not even begun. The consumer never sees your strategy statement or your briefing documents. All she sees are your ads. And if your ads suck, the whole thing sucks.

2. Doing “360˚ media.” This is one of the biggest and dumbest of the media clichés. First of all, no one can afford to do 360˚ media. Second, it’s counter-productive — you wind up sprinkling a little media here and a little there and have no impact anywhere. It is far better to do one medium well than 10 media poorly. The objective of media strategy is to find a way to have maximum impact, not maximum dabbling.

3. Digital Marketing first: Of all the dumb ways to piss away dollars, this is the dumbest. It is the equivalent of choosing the medicine before you know what the ailment is. You would have to be an imbecile to have an ideology that advocated for “bus sides first.” The medium needs to fit the objective. But, as always, when it comes to online advertising all the rules of logic and prudence have been suspended. It is perfectly ok these days to have the answer ready before you know the question.

There is only one aspect of Adelaide advertising that is absolutely critical — you must be noticed. That means you must make good ads.

As Bill Bernbach said – “If nobody notices your ad, everything else is academic.”

There are plenty of sins Adelaide Advertising agencies commit. But the most costly sin of all is to squander money running invisible advertising.